Traditional Aboriginal people were the first boat builders in the Brisbane Waters & they constructed many types of water craft including rafts, bark canoes & dug-out canoes. Many canoes were constructed out of tree bark, with sticky tree sap & twine to hold them together and the use of fallen tree limbs. Dug-out canoes were superior to the bark canoes & easier to build. This ease of construction played a significant role in the dugout canoes’ widespread use. In some early dugout canoes, aboriginals would not make the bottoms of the canoes smooth, but would instead carve “ribbing” into the vessel.   The widespread use of dugout canoes had many impacts on Aboriginal life. The boats had the strength to travel long distance and transport larger prey. The dugout enabled the Aboriginals to vastly expand their hunting grounds. These boats were also used for fishing and the collection of shellfish during the many thousands of years before white settlement. These canoes were used widely by the Darkinyung people in the Brisbane water area.

The first European settlers arrived in Brisbane Water in 1823. Water transportation was the only practical way to travel to and from Sydney. As more settlers came to the district, industries developed including running cattle, timber-getting and the gathering of shells for lime-burning. With these industries came a need for staunch and seaworthy ships to carry the products further afield. The local shipbuilding industry grew from very humble beginnings in the 1820s.

Hardwoods that grew in the hills around Brisbane Water were well suited for the purpose. Individual shipbuilders worked with rudimentary tools to build one or two vessels at temporary yards. Demand steadily grew for the products of Brisbane Water shipwrights. Old hands mentored young newcomers, and families joined in.

Between the 1829 and 1953, over 500 named vessels are known to have been built in and around Brisbane Water. There were probably many more built that are now lost to history.  As iron and later steel ships were built in Australia and Overseas, the craft of timber shipbuilding began to wane. The shipbuilders of Brisbane Water contributed greatly to the economic and maritime history of New South Wales.

The whole concept will provide residents, children and visitors with a healthy and educational experience as they move along the pathway from memorial to memorial.

UPDATE on the memorials along the walkway:

Just a few photographs of the Shipbuilders Memorials before they were completed.  This is a really wonderful project and a beautiful walk along the foreshore taking in the four villages. See the completed memorials on our photo page. 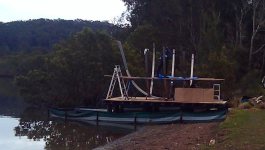 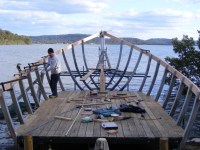 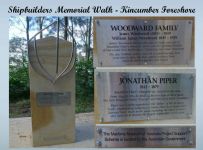